In 1853 he selected the two acre site for the church, which was granted under a Crown Grant in 1855. The style of the Church is early Gothic from the era of Edward the 1st in the 13th Century.

On February 7th, 1858, Bishop James Alipius Goold OSA laid the foundation stone for the church, which commenced being used on a regular basis for Mass in 1863.

The official opening of the church was in 1871 and when the Diocese of Ballarat was formed in 1874, the first Bishop, Dr Michael O'Connor chose it for the Cathedral. The diocese extends to Swan Hill, Robinvale and Mildura in the north along the river Murray, across to the South Australian border down to Portland, Warrnambool and Apollo Bay in the south to the Southern Ocean. The Sunraysia, Mallee, Wimmera, Grampians, Western District and Central Goldfields areas are all included in the Ballarat Diocese.

In 1887, a High Altar, which can be seen still today, and Stations of the Cross were purchased from Rome. The altar is of Carrara marble inlaid with precious stones including Antico Rossi, Lapis Lazuli and antique marbles. The tiles of the Sanctuary and side chapels are from Austria and those in the nave from Minton's England. The first organ installed in 1867, was replaced with the Fincham in 1930.

The stained glass windows were introduced in 1883, the first being that in the Sanctuary. Following this were the Lady Chapel window and Blessed Sacrament Chapel window. These three windows were made in Germany and a slight variation in colour to the other windows can be noticed. They were installed in May 1890. The remaining windows were gradually added to, until the final one in 1910. Of these, the first was presented by the Loreto Sisters representing St Brigid, Abbess of Kildare (note her Crozier, the traditional mark of a Bishop) given in memory of Bishop O’Connor. On the opposite side of the narthex is St Patrick's window, donated by the third Bishop, Bishop Higgins (note the crozier piercing Aengus through the foot). Both these windows have the Holy Spirit uppermost.

The windows on the south side depict the parables; the Workers on the Vineyard, the Good Samaritan, the Ten Maidens, the Prodigal Son, the Weeds and the Wheat. The windows in the south transept are of the burial of Jesus and the Resurrection.


The windows on the north side depict miracles; the Son of widow of Nain restored to life, Cure of the man born blind, Cure of the woman with a haemorrhage, the ten lepers, the miracle of the loaves and fish, the Gerasene demoniac, the epileptic demoniac, the daughter of the Canaanite woman healed. In the north transept the  windows depict the Annunciation and the visit of the Magi (Epiphany). The final window on the north side near the front entrance to the Cathedral is of St Patrick, Missionary & Bishop (385 0 432), patron of the Cathedral Parish and the Diocese of Ballarat. His feast day is celebrated on March 17th.
(Scroll below to learn more about these windows)

An extensive renovation and liturgical re-ordering of the Cathedral took place in 1999. Highlights of this were the installation of a new altar, tabernacle and baptismal space. Also of note was the discovery of the original paint colours around the sanctuary, which have been conserved in the renovation. The new altar, given by the Archdiocese of Melbourne, was consecrated by Archbishop George Pell on April 26th, 2000.

As the alluvial gold became scarcer, the population of Ballarat shifted westward and the need arose for a Church in the west.  St. Patrick’s Church in Sturt St. was commenced in 1858 when the foundation stone was laid with great ceremony.  Nowadays, no one can discover where this foundation stone is located.

St. Patrick’s Hall was built in 1901.
Opened by the then Prime Minister, Edmund Barton.
The Presbytery was erected in 1903.
The Cathedral, Hall and Presbytery are classified by the Historic Buildings Commission.

The Loreto Sisters came to Ballarat in 1875, establishing their first Australian foundation.  They took over the education of girls in the parish.

The Christian Brothers came to Ballarat in 1876 to take charge of the education of boys.  The first boys School was in Skipton St. near Batchs Furniture Store.  It was transferred to the Drummond Street site in 1925.

St. Thomas More School was established in Alfredton in 1980.

In 1985, the St. Joseph’s Girls School in Lyons St.North was amalgamated with the St. Patrick’s Boys School in Drummond Street, on the Drummond St. site.

The Parish of Ballarat was established in 1853 when Fr. Matthew Downing was appointed first resident pastor. In 1853 he selected the two acre site for the church, which was granted under a Crown Grant in 1855.

On February 7th, 1858, Bishop James Alipius Goold OSA laid the foundation stone for the church, which commenced being used on a regular basis for Mass in 1863. The official opening of the Church was in 1871.

Victorian heritage register Statement of Significance​
​
St Patrick's Cathedral, Ballarat built between 1857 and 1871, was based on a design of English architect Charles Hansom, modified by local architects Dowden and Ross and later by JB Denny who designed the eastern section. Reed, Tappin and Smart designed the decorations for the interior in 1891.

St Patrick's Cathedral, built in bluestone and comprising a five bay nave with aisles and clerestory, porches, transepts, side chapels, chancel and sacristies, demonstrates outstanding craftsmanship particularly in the stencilled patterning on the boarded chancel ceiling, the stone carvings by Andrea Stombucco and the excellent examples of stained glass by Clayton and Bell of London, Mayer & Co of Munich and Hardman & Co of Birmingham.

The Cathedral is significant for its association with the important English architect Charles Francis Hansom (1817-1888) who played a prominent role in the Gothic revival of the 1840s in England. A number of his church designs were built in Victoria, sometimes modified by local architects, including St Patrick's Church, Port Fairy and St Augustine's Church, Creswick. St Patrick's Cathedral is Hansom's largest cathedral design in Australia, apart from the Adelaide Cathedral which has been substantially altered.

St Patrick's Cathedral is also significant for its association with the leader of the English Gothic revival movement, Augustus Welby Pugin, through JB Denny. Denny, who had worked with Pugin in England, was responsible for the final form of the cathedral.

The participation of the local community in financing a church of such an impressive scale demonstrates the importance placed in the church as a symbol of the faith and identity of the Catholic community in Ballarat.

The cast iron gates and fence around the perimeter of the complex is designed in an elaborate Gothic style with crowned piers which demonstrates outstanding craftsmanship.​ 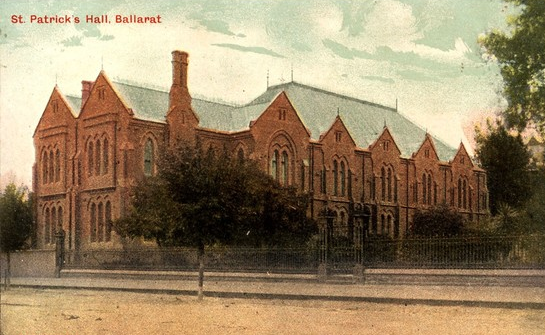 The Cathedral Hall is a massive structure in the Gothic manner, with slender proportions and Gothic window detailing. The main hipped roof of the hall is intersected on both sides by four gables, and the front ridge is intersected by two more gables to form the street elevation. Internally the hall resembles many town halls except for the two tiers of Gothic windows and the manner in which the ceiling curves downward towards the walls. Pointed Gothic windows on the upper level intersect the curved ceiling in a simple groined junction.

The plaster ceiling is coffered by intersecting beams, while a central skylight floods the hall with natural light. Other features of note are the ridging on the front gables, and the iron bell tower framed in steel angles and braced with criss-crossed rods, complete with a huge wheel and a great bell.

St Patrick's Hall demonstrates a notable application of decorative schemes, particularly its highly decorated ceiling which has few parallels amongst other church halls in Victoria.
vhd.heritage.vic.gov.au/vhd/heritagevic#detail_places;1399

The hall is in an important location as part of St Patrick's complex, as well as being part of the group of churches which include St Andrew's Kirk and the former Baptist Church, opposite in Dawson Street. 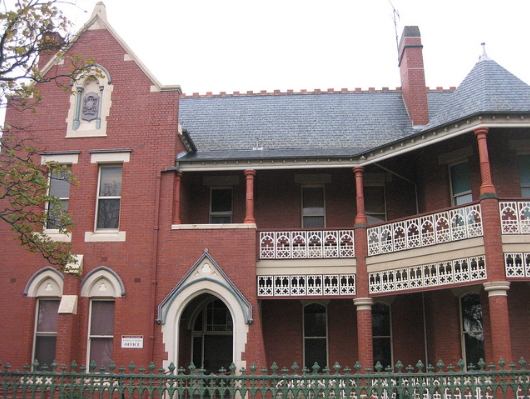 The presbytery, erected in 1903, has a broad two-storied balcony verandah which spreads into an octagonal corner, the roof terminating in a turret. Circular brick piers which carry the verandah and balcony provide an unusual feature, and echo the use of circular piers at the nearby Ballarat Club. The elevation is balanced by a projecting gable, decorated with a blind arch bearing a coat of arms in relief. Another notable feature is the row of neatly detailed chimney stacks.

The building is intact externally and its design, similar to other Roman Catholic presbyterys such as Port Melbourne, is important as a large scale Edwardian residential building. Its relationship to the other buildings in the St Patrick's complex also makes the presbytery notable.
​
References
Ballaarat City Council building permits book, 10 March 1903.
​